The ranks of “unicorn” companies — privately held start-up companies possessing a current valuation of $1 billion USD or more — have been infiltrated by a growing roster of crypto organizations that are dramatically rising in value. While the lineup of crypto unicorns are widely-known, the VC firms backing them are quietly positioning themselves to gain the most from the cryptocurrency revolution.

There are currently over 27 fintech unicorns worldwide with crypto platforms such as Robinhood, Revolut, and Coinbase riding a wave of mass adoption and market growth well beyond the billion-dollar mark. Recent data published by finance intelligence platform CB Insights sheds light on the VC firms behind the success of crypto unicorns, and where they’re investing.

VC Moves in on Crypto Platforms

CB Insights reveals that cryptocurrency platforms have become highly popular with some of the largest venture capital firms in the world. Coinbase, valued at $1.57 billion, Robinhood, valued at $1.3 billion, and Revolut, valued at $1.7 billion, are the first three crypto startups to reach unicorn status — growth predicted well in advance by forward-leaning VC firms. 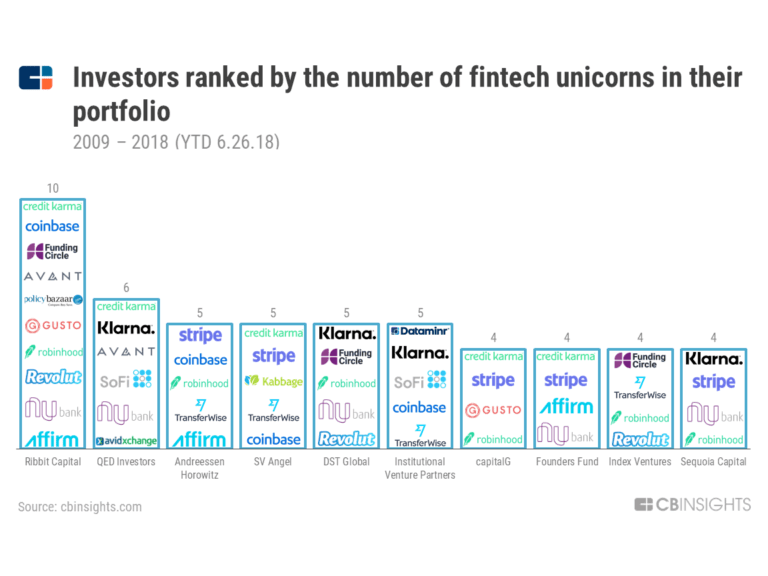 The three most highly valued crypto startups are present in virtually all of the most dynamic fintech-focused VC firms, with a significant portion of investors entering crypto startups in seed or Series A rounds.

Where are Unicorn Hunters Investing?

Ribbit Capital, identified as the most active investor in Fintech unicorns, is deeply invested in the cryptocurrency ecosystem, holding bets on Coinbase, Revolut, and Robinhood. Ribbit isn’t only invested in cryptocurrency juggernauts, however. The California-based fund entered into a joint investment fund launched in partnership between Pantera Capital, Fortress, Benchmark Capital and Ribbit Capital in early 2014, creating the Pantera ICO Fund LP Blockchain Investment Fund.

In combination with the Pantera Blockchain Investment Fund, Ribbit Capital has backed a broad spectrum of blockchain ventures, including 0x, Abra, Augur, Brave, Bitstamp, Filecoin, OmiseGo, Xapo, and more. Ribbit Capital founder Micky Malka has made several significant bets on blockchain-focused projects since 2011 — speaking at the 2017 Next Big Thing Summit, Malka highlighted the need for disruption within the current financial paradigm:

“Money is ripe for disruption. Think about it. Today, it’s easier to make a phone call to anyone around the world for free than it is to send that person $100. It’s easier to buy a $200 smartphone than a $1 app.”

CB Insights data highlights London and San Francisco-based VC firm Index Ventures as the fastest-moving fintech unicorn investor, backing both Revolut and Robinhood in Series A rounds, as well as Xapo and Bitpay. Index Ventures Partner Mike Volpi emphasized the long-term strategy of the firm in an interviewwith TechCrunch:

“Bitcoin has gone through a very interesting stage over the last 12 months, where the currency itself went up, then down, then way up again. Now there’s this debate about the length of the blockchain. We still believe in it, but it’s going to be a long journey and we’re generally coaching [our entrepreneurs] to take a long-term view and don’t spend a lot of money and wait for things to settle out.”

While Index Ventures is optimistic regarding the future of cryptocurrencies, co-founder Neil Rimer remains skeptical that crypto-based funding solutions such as ICOs are able to replicate every aspect of the VC industry:

“Some of these [ICOs] will replace some VCs, and some will replace some [initial public offerings]. But we don’t just allow people to raise money as quickly as possible — we bring a lot of other help and advice, and I think there will continue to be demand for that.”

VCs are able to invest in promising blockchain startups with a traditional equity deal, or can alternatively select a “simple agreement for future tokens” model that allows them to cash out in the form of tokens once the startup has launched. This model allows VC investors greater freedom and flexibility in investments, attracting high numbers of VC investors to the crypto market.

Ultimately, venture capital interest in the cryptocurrency and blockchain ecosystem is inevitable. VC firms typically find withdrawing from poorly performing investments — an issue solved by innovative investment models that have evolved within the blockchain industry.

Disclaimer: Our writers’ opinions are solely their own and do not reflect the opinion of CryptoSlate. None of the information you read on CryptoSlate should be taken as investment advice, nor does CryptoSlate endorse any project that may be mentioned or linked to in this article. Buying and trading cryptocurrencies should be considered a high-risk activity. Please do your own due diligence before taking any action related to content within this article. Finally, CryptoSlate takes no responsibility should you lose money trading cryptocurrency.

A Victory for Tron: BitGo Is Ready to...

Trying to Build a ‘Better Bitcoin’ is as...