It is already the eight time that the CCID released a monthly Global Public Blockchain Technology Assessment Index. In previous months, 33 projects got evaluated. This time, however, the list shows 34 blockchains.

All projects are being evaluated based on three criteria; basic technology, application, and creativity. The CCID first published this ranking this year on May, and since then, it is updating the list every month.

EOS [EOS] and Ethereum [ETH] maintained their positions at the top, ranked respectively first and second, while Bitcoin climbed from the 19th spot in November to the 18th position in December

This edition, Ontology, has made its debut to the CCID list. Launched by Chinese company Onchain in 2017, Ontology is a public platform that aims to remove barriers between the blockchain and business sector.

The CCID commented on ranking Ontology:

“Its main network was launched in June 2018. In this assessment, Ontology has outstanding performance in basic technology and application, with a composite index of 112.6, ranking 4th in the list.” 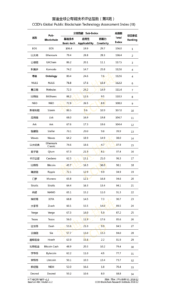 As the Blockchain Hype Dies, Why Should We...

No Time For Talk: Manufacturers Have To Act...