Nvidia lowers its revenue guidance for the fourth quarter of 2018 sending its shares tanking downwards by 14%. Other chip stocks followed suit. Analysts say Apple’s imminent earnings report means it could get much worse for chipmakers.

I do not want to own semis going into the Apple print.

The iPhone maker has said it won’t publish an actual number of units sold. Guidance from CEO Tim Cook earlier in January already shows unit sales may have fallen. If Apple’s revenue report reflects this, then, says O’Leary:

We’re going to be light on units, it’s going to make grown men weep in the semi space because the multiplier effect is going to be brutal.

It could mean Apple suppliers, like Broadcom and Analog Devices, join Nvidia in a downward spiral. Broadcom shares have fallen 0.12% during trading today, Analog Devices stock is down 0.34%.

Apple may have been timely with the release of its new US supplier spend figures released today. The iPhone maker says it spent $60 billion with American parts makers in 2018. An increase of 10%.

Apple prices may increase because of the massive Tariffs we may be imposing on China – but there is an easy solution where there would be ZERO tax, and indeed a tax incentive. Make your products in the United States instead of China. Start building new plants now. Exciting! #MAGA

54.7K people are talking about this

As well as Broadcom, Apple mentions another “semiconductor,” Qorvo Inc, its shares have fallen over 1% too today.

Another supplier, Foxconn, refuted claims it was preparing for massive layoffs this month. However, Foxconn is also planning to open a plant on US soil, in Wisconsin.

CHIP STOCKS COULD GO FROM BEST DAY TO WORST WEEK Just last Thursday chip stocks had one of their best days in ten years. Xilinx, Teradyne, Lam Research, and Texas Instruments all surpassed earnings expectations in reports delivered last week. The performance took the wider sector into the green.

Of 30 companies on the PHLX Semiconductor Index only Qualcomm remained red. The semiconductor index is now down 2.09% today. Xilinx stock has fallen back 0.92% today but Teradyne and Lam Research finished trading on a positive note. 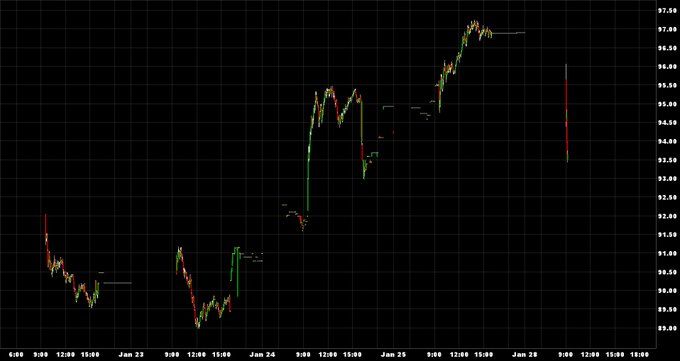 That awful feeling when without notice the rug is pulled out from you…… chip stocks $NVDA $SMH. Oops. Strong argument for not trying to squeeze the last nickel from strength for longs or weakness for shorts. $SPX $NDX $IWM

Nvidia led today’s chip stock plunge with a huge fall of 14%. It reduced its revenue guidance down from $2.7 billion to $2.2 billion blaming weaker sales and China’s slowing economy.

Blockchain Applications and Its Future

How Blockchain Could Change the Real Estate Investment...

Is Blockchain Solving An Elusive Or Non-Existent Problem...

Future Of Blockchain University Conference That Aims To...

Does Kik Stand A Chance Against the Goliath...