Following a high-profile strategic partnership with HTC, the largest mobile phone manufacturer based in Taiwan, the price of a virtual reality-focused crypto asset Decentraland (MANA) surged by 60 percent. 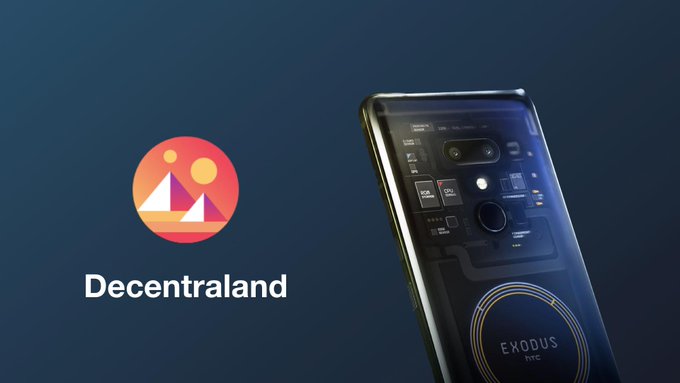 We’re excited to announce our new partnership with HTC! We’ll be working with HTC to bring the Decentraland ecosystem to the Exodus 1, HTC’s blockchain enabled phone, complete with an integrated hardware wallet. Read more on our blog at: https://decentraland.org/blog/announcements/decentraland-partners-with-htc …

The abrupt increase in the price of Decentraland comes less than 24 hours after Enjin Coin, a native crypto asset on a gaming blockchain network called Enjin, recorded a staggering 200 percent increase against Bitcoin after its listing on the Samsung Blockchain Wallet.

DECENTRALAND ON HTC AND ENJIN COIN ON SAMSUNG, WHY UNIQUE CRYPTO ASSETS?

On February 26, the Decentraland team officially announced its partnership with the HTC Exodus 1, the world’s first native blockchain smartphone introduced by HTC.

The Exodus 1 was launched in late 2018 with a private blockchain vault called the Zion Vault embedded into the device, enabling users of the smartphone to securely hold crypto assets.

Three months after the distribution of the Exodus 1, Samsung integrated a cryptocurrency private key storage into its flagship product the Galaxy S10 called the Samsung Blockchain Wallet, providing users with native access to cryptocurrencies.

Both smartphone manufacturers are said to have integrated unique crypto assets like Decentraland and Enjin Coin over major cryptocurrencies in the likes of Ripple, EOS, Litecoin, Stellar, and TRON because of their belief that the potential of blockchain technology exceeds the realm of payments.

In its official blockchain tutorial, Samsung emphasized that the blockchain can be utilized in a wide range of areas such as insurance, gaming, and e-commerce.

“The blockchain is a new method that enables every user to store and process data in a decentralized ecosystem, and it is used in many areas. [Such areas include] secure distribution information confirmation, insurance and contract verification, copyrights management, content distribution, game items storage, crypto assets storage, and cryptocurrency transactions,” Samsung’s tutorial translated from Korean by CCN read.

In a statement, HTC Exodus and Decentraland stated that they believe in allowing users to manage cryptocurrencies and other virtual possessions such as virtual reality identities, data, and assets, similar to Enjin’s in-game items and products stored on the blockchain.

Both HTC Exodus and Decentraland are committed to redefining the way people manage their identities, privacy, cryptocurrencies, and other virtual possessions online.

By storing private keys directly on the phone’s hardware, Exodus allows users to secure their Decentraland identities, data, and assets directly in their pocket – totally cutting out the middleman. Decentraland’s LAND (the ERC-721 virtual real estate that makes up Genesis City) and MANA (our Ethereum-based cryptocurrency) will both be supported by the Zion Vault.

Throughout the 14-month crypto bear market, Decentraland has consistently been one of the best performing digital assets alongside Bitcoin, Binance Coin, and Maker. From its all-time high, Decentraland has lost 81 percent while most tokens recorded losses in the 95 to 99 percent range.

Bitcoin has lost 80 percent of its value since its all-time high, slightly outperforming Decentraland. Still, the asset remains as one of the top 10 best performing crypto assets throughout the bear market.

IS IT THE YEAR OF TOKENS?

Historically, in a sideways market, tokens tend to outperform Bitcoin and other major assets such as Ethereum.

In recent weeks, as Bitcoin gradually climbed from mid-$3,000 to $4,000, many tokens recorded substantial gains against both BTC and the USD.

This is a perfect example of S/R zones at work – a perfect range.
Play it accordingly by buying support & selling resistance or stay out.
Everything else will chop you up.

While BTC cleanly broke out of the $4,000 resistance level for the first time since November, technical analysts are cautious on the short-term outlook on the price trend of the dominant cryptocurrency.

Bitcoin recorded a strong movement to $4,200 last week but the magnitude of the retracement of the asset surprised many traders.

Tether and Bitfinex Ready to Fight