It looks like California tax rates, which are some of the highest in the nation, may have cost the San Francisco Giants their shot at top MLB talent Bryce Harper.

The 26-year-old professional baseball star agreed to a 13-year, $330 million deal with the Philadelphia Phillies Thursday.

A report from NBC Bay Area Sports’ Alex Pavlocic suggests there was a bidding war, and California state taxes are too high to make San Francisco competitive for Harper’s talents.

I’m told Giants made a 12-year, $310 million offer to Bryce Harper. They were willing to go higher but would have had to go well over $330 million to get it done because of California taxes.

1,230 people are talking about this

It’s another tragic case of some of the nation’s best talent and resources being chased out of a community by confiscatory government tax rates.

Bryce Harper’s deal is the richest contract in this history of North American sports.

A $330 million business was trying to come to San Francisco, but the fiscal recklessness of the government of California deprived its residents of this lucrative enterprise.

Reportedly, the Giants final bid to hire Bryce Harper was $310 million, but the Giants’ front office would have gone higher if only California’s high taxes didn’t make it too expensive for San Francisco’s baseball team to compete with Harper’s after-tax incentive to play for the Phillies.

Robert Raiola, director of the Sports and Entertainment Group at PFK O’Connor Davies, calculates that after federal, state, and local taxes, Harper will be compensated roughly $184 million from the Phillies. By comparison, the Giants’ $310 million offer would have netted the slugger approximately $161 million. 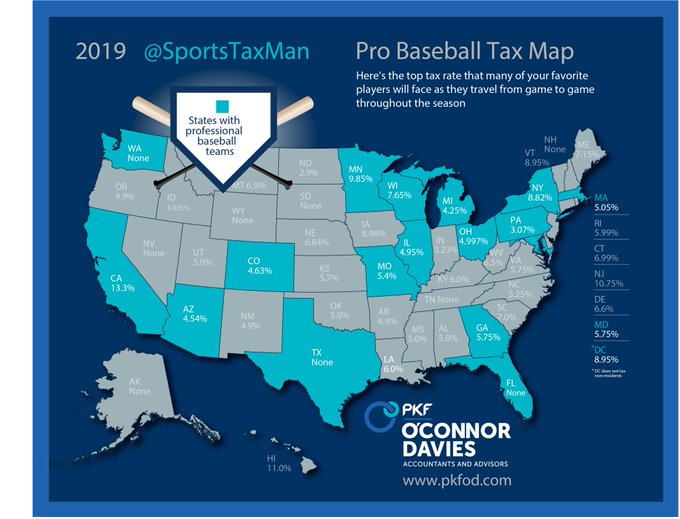 .⁦@theaceofspaeder⁩ a look at the taxes #MLB players will pay as they travel around the league

This is remarkably similar to high tax rates in Queens, New York pushing away top talent and resources from Amazon. The retail giant chose not to build its $3 billion HQ2 there after local activists and politicians like Alexandria Ocasio Cortez demanded Amazon pay higher taxes.

The press and ambitious political activists think they’re doing taxpayers and social welfare recipients a favor to demand that these companies pay higher taxes if they want to bring their business to town.

But, all they’re doing is chasing away business benefiting the local economy, while actually lowering the overall amount of tax revenue the government collects.

THE BRAIN DRAIN: THE AOC EFFECT

When this happens, we might start calling it “the AOC Effect.”

We just saw it happen with the San Francisco Giants losing out on Bryce Harper, the most coveted MLB free agent of offseason, due to high taxes.

We saw it when Amazon pulled out of Queens over AOC’s insistence on high taxes. We even saw it over the entire 20th century, with the “brain drain” of scientists, engineers, and doctors from socialist countries in Europe to the United States of America.

The technical term for brain drain is human capital flight.

It’s a predictable result of people responding to financial incentives and having many places with a lot of great opportunities to choose from to call home.

In an increasingly mobile and digitally connected world, this means local governments have to keep taxes competitive or see the money and talent flee to a place that does.

Disclaimer: The views expressed in the article are solely those of the author and do not represent those of, nor should they be attributed to, CCN.

Bitcoin Price and the Upcoming Halving. What’s the...