IBM and Denver-based credit union service organization CULedger, have struck a collaboration deal by which new blockchain-based services will be pioneered to help credit unions provide their members with greater efficiencies and an enhanced user experience. CULedger focuses on delivering “innovative applications” to credit unions via its cross-border global distributed ledger platform.

Specifically, IBM and CULedger, a consortium of credit unions, are to  work together to use permissioned blockchain technologies to create an immutable audit trail, which can be used to create new business models and transform existing business processes for credit unions.

The parties also intend to help foster “greater financial inclusion” by extending the reach of services to a broader range of new members.

Globally today there are over 260 million members belonging to credit unions, financial co-operatives that provide savings, loans and a range of services to their members, with circulating assets put at more than $1.7 trillion in 105 countries.

Owned and controlled by these members who use their services – not by external shareholders or investors – each member has one vote and volunteer directors are elected from the membership – by the membership.

As such and historically they are known for providing superior customer service – rather than being driven by maximising profits. They also come in all shapes and sizes, and can offer services spanning online/phone banking, payroll partnership with your employer and providing credit at competitive rates.

Across the Pond in Britain the first credit union start trading back in 1964, and over the last 50 or so years, they have grown to provide loans and savings to more than 1.2 million people across England, Scotland and Wales. 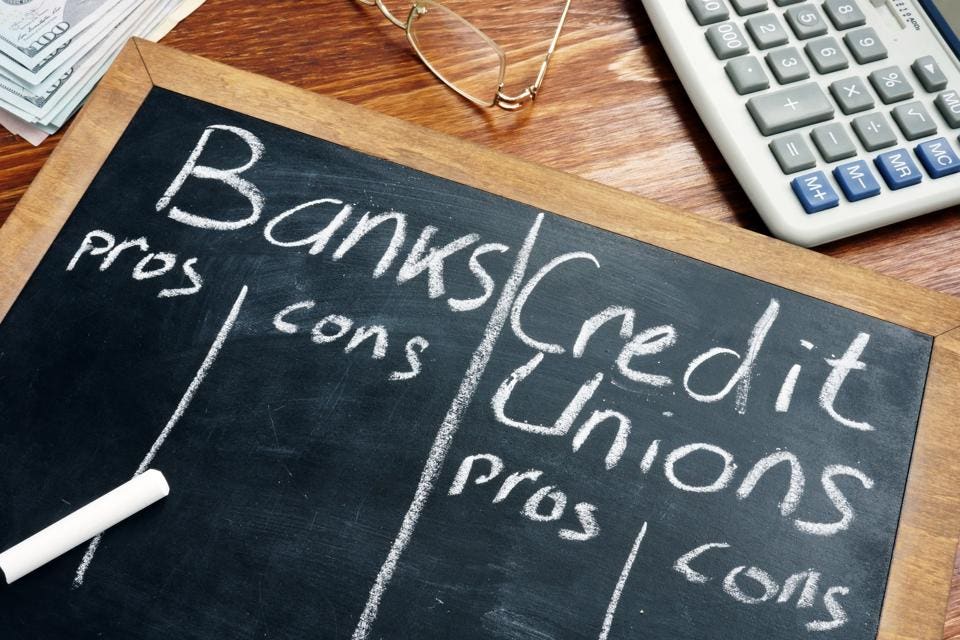 Banks vs. Credit Unions. Pros and cons scribbled on a blackboard. (Photocredit: Getty).GETTY

It joined R3’s global network of over 200 of the world’s largest financial services firms, technology companies, central banks, regulators, and trade associations working together on R3’s Corda platform, which is already being used in industries spanning financial services, healthcare, shipping, insurance and others.

Since 2016, IBM has worked with a wide variety of clients across financial services, supply chain, government, retail, digital rights management and healthcare sectors to implement blockchain applications. And, today it operates a number of networks in this space that are running live and in production, around 1,600 staff working in blockchain and DLT across all areas and sectors.

Highlighting some of ‘Big Blue’s endeavours in the space, in April 2018 IBM became a “founding Steward” of the Sovrin Foundation, a Salt Lake-based private-sector international non-profit organization that utilizes the power of a “hybrid” distributed ledger (blockchain), to stem fraud and address the current centralized identity system that costs individuals and businesses billions of dollars every year.

Prior that in January 2018, Danish business conglomerate A.P. Moller- Maersk and IBM sealed plans to form a joint venture based in New York to provide more efficient and secure methods for global trade using blockchain technology. And, in December 2017 Big Blue was part of a consortium with Walmart and China’s JD.com amongst others to launch a food safety alliance applying DLT solutions.

The cloud-based IBM Blockchain Platform delivers the end-to-end capabilities, which clients need to quickly activate and develop, operate, govern and secure their own business networks.

CULedger provides advantages to credit unions and their members by reducing risks associated with cybersecurity and fraud, streamlining internal processes and reducing administrative and operational costs.

The adoption of blockchain technology, it is said by the parties, will help “build continued momentum among all demographics”, as well as small and medium enterprises (SMEs) that currently lack access to financial services.

By creating a permissioned blockchain network where services can be shared among all credit unions, CULedger claims that it will improve services such as identification authentication, regulatory compliance around know-your-customer (KYC), lending and payments, while making it easier and more efficient for consumers to conduct any interactions that require authentication.

John Ainsworth, CULedger’s CEO and President, commenting in the wake of news of the collaboration said: “A cooperative model that helps improve the member experience while benefitting all credit unions is the ideal approach to ensuring the next wave of financial innovation for the credit union industry.”

He added: “We are creating a network through which all members can join and access new services and enabling credit unions to become even more competitive while addressing new market dynamics where members are demanding even more for their financial services provider.”

Credit union members worldwide will also have access to a CULedger issued digital credential, called “MyCUID” that adheres to the privacy-by-design requirements of self-sovereign identity supported by the Sovrin Foundation.

Claimed as the first global digital identity ecosystem for credit unions and their members that will become the foundation of the entire CULedger platform, MyCUID is touted as helping credit unions support so-called shared branching, which allows members to conduct transactions among any credit union on the network.

And, all future applications, including those  in CULedger’s current roadmap such as loan participations and cross-border payments, will be enabled through a private, permissioned distributed ledger network  (i.e. only selecting entry of authentic and verified participants) – development for which starts this year. 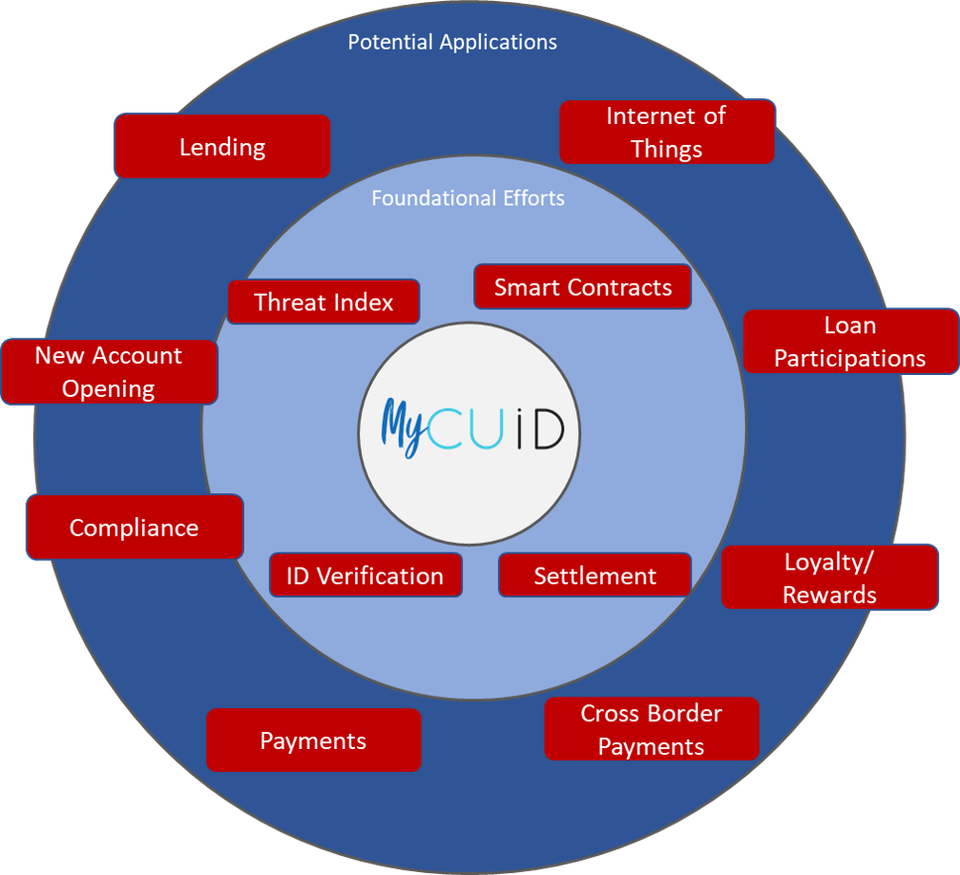 A host of future ways are envisaged that distributed ledger technology (blockchain) will provide value to the credit union industry. (Source: CULedger).CULEDGER

According to a Gartner report titled “Forecast: Blockchain Business Value, Worldwide, 2017-2030”, the potential value of blockchain or distributed ledger technology [DLT] to the enterprise is expected to grow to more than $360 billion by 2026, and subsequently exceed $3.1 trillion by 2030.

As the financial services industry continues to evolve, blockchain technology is being used to help address consumer demands for safer, faster and more efficient transactions.

Siim Õunap, COO at blockchain and crypto marketing agency Savii Digital, commenting on the IBM/CULedger collaboration said: “As more and more platforms offering financial services are made easier, more transparent and cheaper by using blockchain, it has quickly become the go-to technology for financial services. The deal between  IBM and CULedger is yet another perfect example of financial service that works better with the use of the blockchain. And, in a not so distant future, it will likely become a standard like ISO or perhaps even as a part of 20022.”

Adding that this decentralized approach using blockchain helps put the customer “in control of their own identity”, the executive, who has been at IBM for over 30 years and today focused on driving open ecosystem growth for Blockchain, said: “The work underway between CULedger and IBM will also lay the foundation for new kinds of services and collaboration among credit unions as we work together to scale and extend the network.”

Over time, IBM, a recognized leader in Enterprise Blockchain, and CULedger are to expand the scope of the collaboration to use blockchain to support other services such as know-your-customer (KYC) and know-your-supplier regulatory requirements. Initial services on the CULedger blockchain network will be available to credit unions worldwide beginning later in 2019.

Could An XRP Payments Plug-In Power Payments At 3.3 Million Online Stores In Future?

This US Steakhouse Will Let You Trace Your...

Crypto Is Down, So Why Am I Smiling?

Wait, Did Blockchain Just Get A Little Hipper?

A Hackers Take On Blockchain Security

Why When It Comes To Blockchain, Mainstream Is...