Building Trust In The Trustless: Blockchain’s Best Asset Is Holding It Back

By now, you’ve likely heard blockchain technology described as ‘trustless’. It’s repeatedly touted as one of the technology’s key benefits — and for good reason. The development of blockchain marks the first time it’s been possible to develop software that doesn’t require a trusted intermediary.

And yet, perhaps ironically, it’s trust, or mistrust and uncertainty, in the technology that’s holding back blockchain’s mainstream adoption. A lack of trust is cited as one of the main reasons new technologies, and blockchain specifically, are failing to take off.

The introduction of new technologies can happen quicker when the experience seems less foreign to consumers. A less technical example of this is when in the 1960s a creative chef kick-started a sushi craze across the United States after putting the ingredients his customers found most familiar on the outside and the less familiar ones, like seaweed, on the inside.

While blockchain’s seaweed is a little harder to hide, building trust in the trustless isn’t as hopeless as it seems. 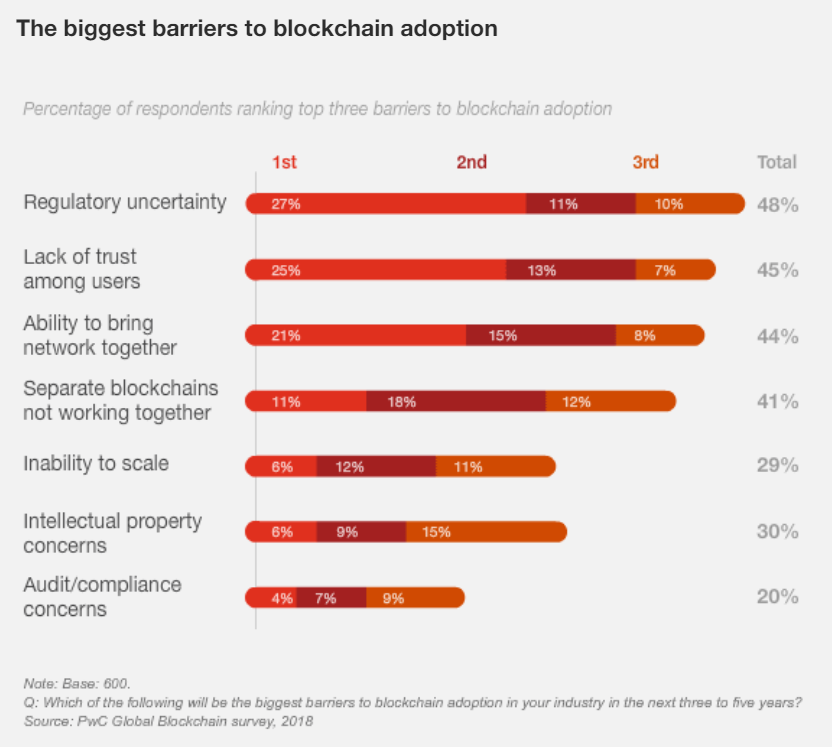 Caption: PwC’s 2018 survey shows some of the issues of trust and barriers to blockchain adoption

Trusting Strangers On The Internet

It used to be the number one lesson on anti-scamming lists; don’t send money to strangers on the internet, no matter what they’re promising you. These days, we’re doing it all the time. Just not directly. We log into PayPal and trust them to handle our money appropriately when we’re making a purchase. If we don’t get that eBay item? No stress. Start a dispute and PayPal will refund you.

But despite the leaps and bounds we’ve made in trusting third parties, we still have issues with fraud online. The online gaming industry, which in the United States alone is expected to be worth 2.2 trillion dollars by 2021, has an issue with the inability to prove the origin or scarcity of virtual objects and collectables.

Blockchain technology is useful for gamers thanks to the development of non-fungible assets (NFT). An NFT is basically a unique representation of an asset in the form of a virtual token. Thanks to developments in cryptography, we can now verifiably prove both authenticity and ownership of an asset. We can collectively thank CryptoKitties for bringing the concept of NFTs to the mainstream. The digital assets went viral towards the end of 2017, and some even sold for hundreds of thousands of USD. 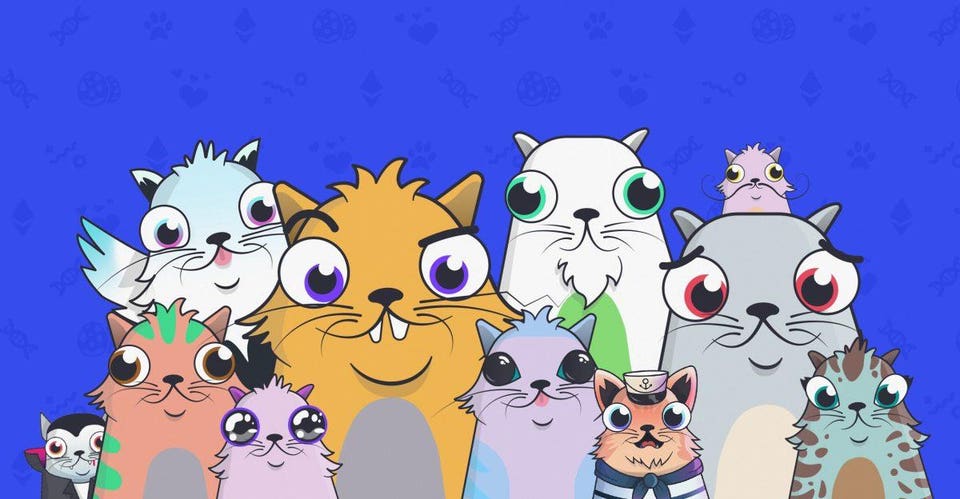 Some CryptoKitties have sold for hundreds of thousands of dollars.

CryptoKitties aside, many of the current implementations of NFTs are heavily focused on the trading of gaming ‘skins’. Like the custom weapons or armor you can purchase in first-person combat games such as Counter-Strike. Counter-Strike has been around for close to twenty years so the concept of trading ‘skins’ is nothing new. But the way in which blockchain enables this to take place, by eliminating the issues that previously existed in the market, such as fraud, does far more for trust in the technology than simply labelling it trustless.

The Secure Can Always Be More Secure

The very architecture of blockchain makes it secure. But hacks such as Mt. Gox and CoinCheck prove that where there’s money involved, the hackers will follow.

But Mt. Gox and CoinCheck have something in common. They’re both hacks that occurred on centralized exchanges and illustrate that centralized systems are weak points in the blockchain and cryptocurrency space.

They’re inherently vulnerable because they require customers to disclose personal information and private keys, they hold all of their customers assets in a centralized server and keep their systems off-chain, meaning their transactions are not recorded on the blockchain. As we’ve seen, this can lead to unsafe storage of information, funds, and private keys, which are then prone to attack.

Enter: the rise of Decentralized Exchanges (DEXes), a promising solution to these security concerns.

DEXes   build peer-to-peer marketplaces directly on blockchain,  allowing you to exchange values person to person, and ensuring you don’t have to submit your private keys to a third party or have your funds sitting in a centralized asset account.

There are a number of companies developing products that are doing just that, such as AirSwap.

“With AirSwap we have designed a system that is between two peers and uses a smart contract for every trade – where you and I can agree on some terms and then submit it for execution and settlement on a smart contract,” says Fluidity and AirSwap cofounder Don Mosites.

“This means that you’re in custody of your own funds the whole time, the price that you execute is in your hands, and then the settlement happens on-chain (on the blockchain).”

It’s by decentralizing these three components – custody, execution and settlement — that Mosites sees as the real key to security for exchange users. 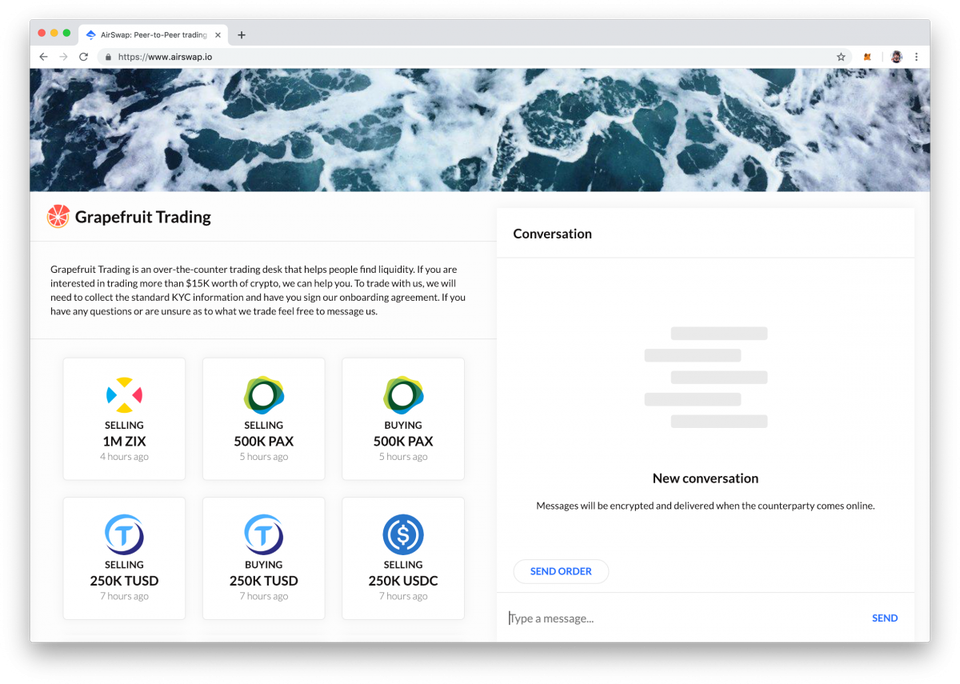 Building a DEX is not without challenges, however. They’re currently difficult to scale, lack liquidity, do not provide fiat payments and the user experience has been quite clumsy and too technical for most to use thus far.But many smart minds are hard at work developing the tech and solutions to ensure secure safe platforms for trading digital currencies. Even Binance, the company behind the largest centralized cryptocurrency exchange, will this year be launching their own decentralized exchange, Binance DEX.Progress in DEXes is certainly a space to watch and one that can help deliver greater security and trust in crypto and blockchain technology.

Another way to build trust is to actively seek out those with a propensity to damage it. Hackers and scammers aren’t going in there, but the ways in which we hunt them are evolving thanks to developments in technology.

One such example is Elliptic, a company ‘driven by the belief that cryptocurrencies would play a key role in the future of finance, and that blockchain technology would transform how humans do business’.

Elliptic’s team use technology to stop criminals from undermining the trustless foundations on which cryptocurrencies and blockchain businesses were built. They do this by solving the problem of identity and combing out suspicious, fraudulent and criminal activities.

The team helps law enforcers identify and catch wrongdoers online, with a specific focus on those using cryptocurrencies and blockchain technology to do bad rather than good. They also help crypto companies meet regulation, an important step in widespread adoption and trust.

Their investigations unit is of increasing important. Elliptic’s dedicated team of cryptocurrency investigators provides expertise and training for businesses to upskill and inform about the dark web, cryptocurrencies and provide ways to protect yourselves online.

While some companies are focusing on how they embed technologies like blockchain into their financial processes, others are innovating the audit process to suit the technology and ensure they earn the required trust of investors.

Issues of jurisdiction, liability, enforceability of smart contracts, identity and privacy are just some of the regulatory, legal and governance challenges the industry is navigating.

Anti-Money Laundering (AML), Know Your Customer (KYC) compliance and regulating smart contracts are key areas where regulation is starting to take shape. Coinbase, for example, has been a registered Money Services Business with FinCEN since 2013, meaning it’s been subject to AML guidelines for over five years. Since registering, most major exchanges operating in the U.S. have followed suit. In recent years a number of self-regulatory bodies have also surfaced with the aim of creating AML standards for crypto.

In the KYC compliance space, a group of 39 banks and regulators, including BNP Paribas and Deutsche Bank, last year conducted a trial of a KYC compliance application built upon R3’s Corda blockchain platform. R3 has also been busy building security tokens for its platform with in-built regulatory compliance, working in close collaboration with a vast network of financial institutions, regulators, trade associations, professional services firms and technology companies to do so.

It’s his kind of collaboration that is essential for the development of the industry. If blockchain’s full potential is to be realized it will have to find its place within a regulatory framework rather than evade it. At the same time, regulation needs to be flexible and responsive to the full potential of blockchain in order not to stifle it’s development.

The rate of adoption for an emerging technology is influenced by how well it’s understood and trusted. It often takes new, agile, risk-taking enterprises and start-ups to first test and develop the technology before more mainstream companies will take the leap of faith. But once these major players do, the technology will become truly embedded, embraced and ubiquitous in business and society. This is only a sample of services and products out there that are bringing trust to blockchain technology and businesses. There’s no doubt we’ll see many more of these secondary and tertiary products evolve as the technology and industry matures.

But when it comes to trust people don’t want something entirely new, they want the familiar done differently. Perhaps what blockchain needs is a rebrand. Let’s stop using phrases like ‘trustless’ and focus on what familiar problems we can solve instead. These examples, just like the California sushi roll, prove that the way you package something will make all the difference when it comes to mass adoption.

Bakkt CEO Claims Progress is Being Made; Launch Date Still Not Clear

Hong Kong: ICO & STO Only For The Rich Investors With At Least $1M In Portfolio – The Type Of Regulation Crypto Really Needs?

Russia’s Not Buying Bitcoin, Dx.Exchange’s Shady Past, and...

Stranger Things: The Upside of Down Bitcoin Prices