One of India’s leading private banks, the Housing Development Financial Corporation (HDFC), is reportedly sending users whose banking transactions have been associated with cryptocurrencies emails that warn them against doing so, with the risk of having their accounts frozen should they continue doing so.

One user, the Indian CryptoGirl, tweeted about the about the subject, displaying the email that HDFC had sent out to some users, 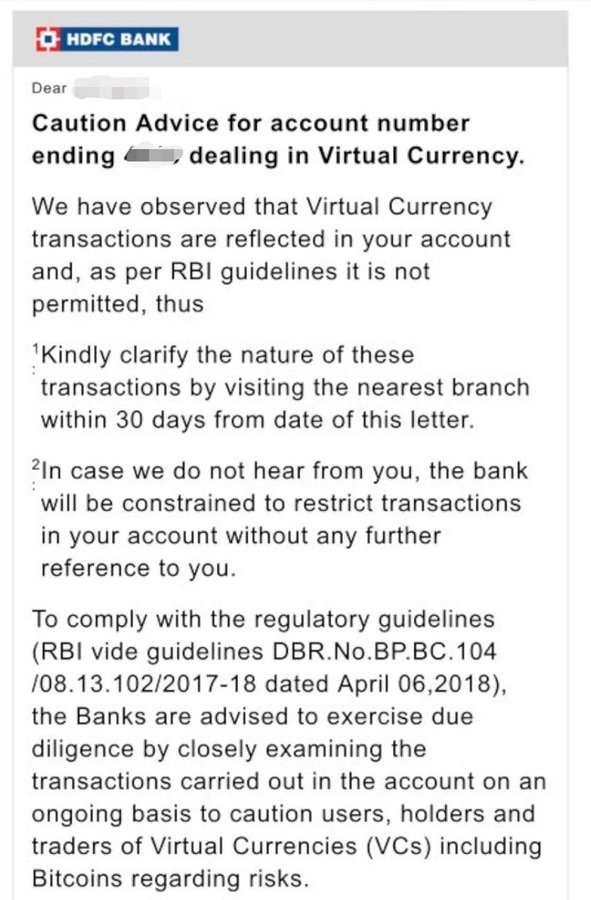 Clarify nature of transaction within 30 days at HDFC branch

Else we will freeze the account without further reference

Threats like these strengthen my belief in Crypto. Soon we’ll be our own bank.

The email states that the bank expects users to clarify any transactions that they suspect may be linked to digital currencies, and failing to do so may result in a frozen account.

Many businesses and crypto-enthusiasts have rallied against the decision by authorities, which have been harsh. Recently rumors have been floating that a bill completely banning cryptocurrencies had been drafted, and that it would be up for consideration for the new government following the end of the general elections in May. Anthony Pompliano has shown his support investors in the country,

To the citizens of India,

Bitcoin is a global, decentralized currency that evens the playing field for billions of people.

Keep working hard. The rest of us are cheering for your success, regardless of your government’s decisions.

1,010 people are talking about this

The action by HDFC is similar to that taken by other banks in the nation, including Kotak Mahindra and Digibank. The reason stated by these banks is that trading in digital assets goes against the norms stated by the country’s central bank, the Reserve Bank of India (RBI).

A Glimpse of Banking’s Future, Live on the Ethereum Blockchain

Neo 3.0 to Launch on New Blockchain Network, Users Will Need to Swap Tokens

NEM Blockchain Technology And Its Uses In E-commerce...