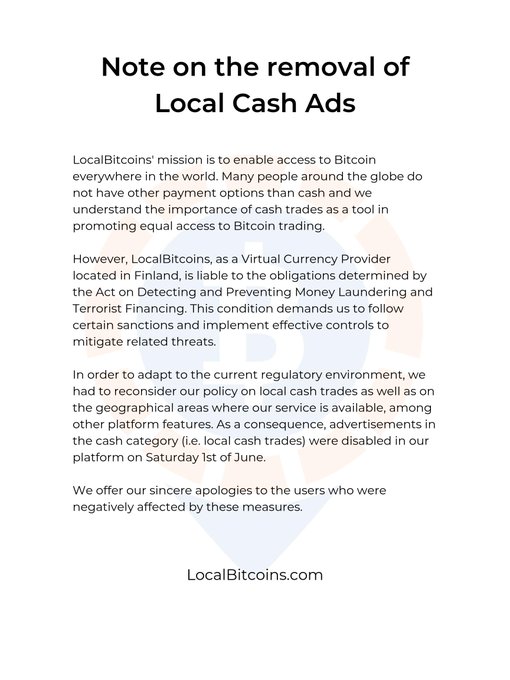 Note on the removal of Local Cash Ads

The tweet complements the company’s recent silent decision (as of June 1st) that outraged the crypto community. In it, the company appeals to the Act on Detecting and Preventing Money Laundering and Terrorist Financing. According to the exchange, it needs to follow certain sanctions and implement correspondent measures.

The company went on to write, “In order to adapt to the current regulatory environment, we had to reconsider our policy on local cash trades as well as on geographical areas where our service is available, among other platform features. As a consequence, advertisements in the cash category (i.e. local cash trades) were disabled in our platform on Saturday 1st June.”

The news comes following a recent change in the Finnish legislation. Specifically, the country’s government adopted new AML rules, which will complicate life for the local crypto scene. The rumor has it that LocalBitcoins might become subject to the monitoring by the Financial Supervisory Authority of Finland.

Scrutiny on the way?

Over the past couple of weeks, crypto scene has been in the loop. Unsurprisingly, financial watchdogs in different countries have exhibited a special interest in it. Tether and Bitfinex, for example, are still being scrutinized over alleged fraud. In the meanwhile, Bitcoin Blender, the cryptocurrency mixing service, has recently shut down without any explanation whatsoever. However, some suspect that the abrupt move occurred due to a recent crackdown by the European authorities, specifically Europol and the Dutch and Luxembourg. Together, they established that a similar service, BestMixer, had resorted to money laundering.

With the crypto market still performing relatively fine, such interest will mostly become a recurring theme.

Stellar Lumens Is About to Begin Trading on...

Key Comments From Libra Hearing At US House...