Bitmarket, a Polish cryptocurrency exchange which started operating in 2014 has stopped operations without warning, citing ‘loss of liquidity’ as the reason for its shutdown.

In a statement posted on its official website, the platform declined to provide any further information, including what is likely to happen to funds trapped in user exchange wallets.

“Dear Users, we regret to inform you that due to the loss of liquidity, since 08/07/2019, Bitmarket.pl/net was forced to cease its operations. We will inform you about further steps”

The statement, which does not give a defined date or period for users to expect an update, or indeed any reason for the sudden “loss of liquidity” is noticeably vague, and has expectedly sent users into a state of panic. Already, multiple accusations and conspiracy theories are already making their way around the internet, with reddit users alleging that the exchange has been showing signs of such an impending action for weeks, without confirming to users what was actually going on. 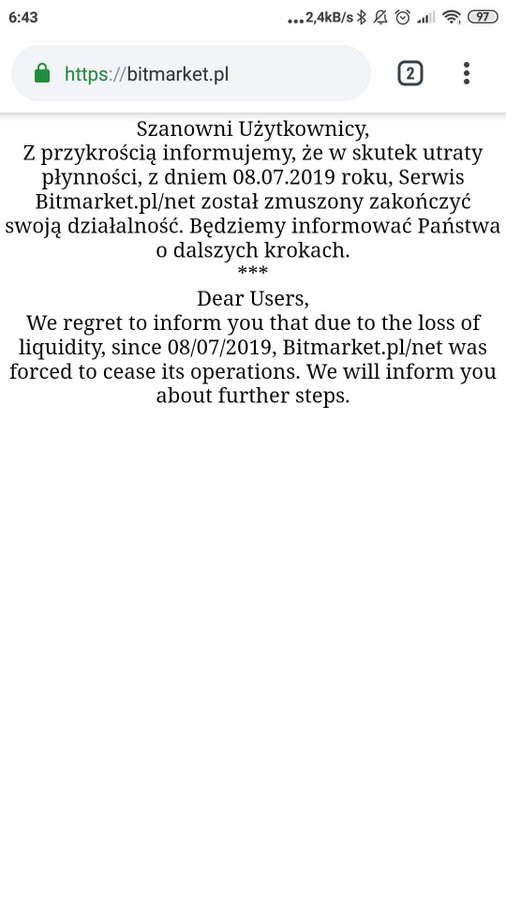 Was BitMarket an Exit Scam?

According to BitMarket users on Reddit, over the last couple of weeks, users had been asked to make several changes to their accounts without the exchange providing any form of in-depth explanation. He says that Bitmarket users were asked to change their passwords, and had their API keys changed as well.

A few days after the password and API key change, users received another message saying:

“The level of verification of your account on BitMarket.pl is insufficient with regard to the Act on Counteracting Money Laundering and Terrorism Funding. Please go to the ACCOUNT/VERIFICATION tab and complete the account verification process.”

The users claim that they immediately saw this this as a clear red flag and immediately made frantic efforts to withdraw their coins from the platform. The exchange then stopped some users from withdrawing funds until they uploaded an accepted means of identification. Along with the ID, they were also required to submit a picture of themselves holding the identification plus a note stating that the crypto they were purchasing on the platform was a “personal investment.” 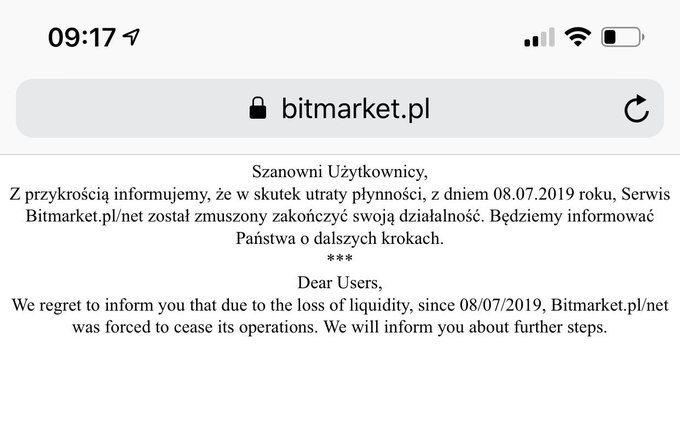 According to users, during this time BitMarket had a number of its representatives working to allay their fears across various Polish cryptocurrency forums. These representatives claimed only people whose KYC had not been completed were temporarily suspended from making transactions. They also avoided addressing accusations from users that the exchange had been hacked. So far, BitMarket remains firmly and ominously silent.

Hack or Exit Scam, Keep Your Coins Away From Hot Wallets

Even if the issue somehow reaches an amicable resolution (which looks a forlorn and remote possibility at the moment), it again bears out the need to keep all significant crypto holdings off exchange wallets. Earlier in the year New Zealand-based exchange Cryptopia suffered a catastrophic hack that saw it lose more than $15 million worth of user crypto funds. A few months before, Japanese crypto exchange Zaif lost over $60 million in user funds during its own hacking saga.

In these and other hacking cases going back to Mt. Gox in 2014, affected users are still yet to get their money back.

Even when a hack is not involved, users have to contend with the possibility that the exchage itself may not be operating in good faith. As with any other developing financial ecosystem, crypto is still riddled with risks as the industry moves toward finding a common global standard to offer users more protection than they currently have.

Until such a time, the best course of action remains to keep significant cryptocurrency holdings in cold storage.

Arizona State University to Use SalesForce Blockchain for Academic Records

Amazon Wants to Build a Blockchain for Ads,...

Fake Volume on Crypto Exchanges Isn’t the Half...

Weiss Ratings: XRP has Competitive Advantage over other...