The New York Federal Reserve recession indicator is now at highs last seen in 2008 when the US economy collapsed. The indicator has accurately predicted every recession since the 1960s. 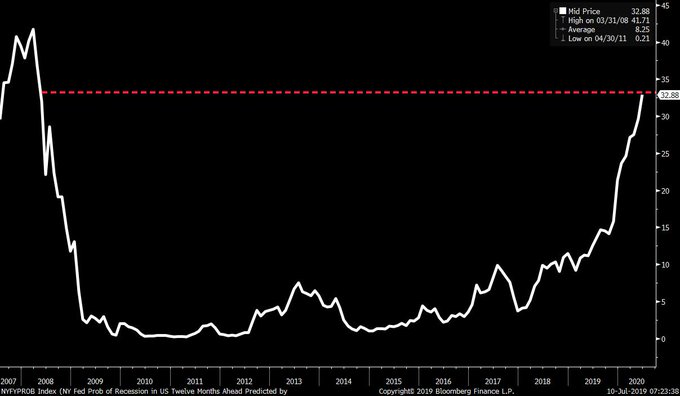 The New York Fed’s recession indicator is now at its highest since 2008.

Dow Jones Industrial Average (DJIA) futures slumped 71 points lower (0.27 percent) on Wednesday, putting the Wall Street index on track for a third day of defeat. As of 6.35 am, DJIA futures were at 26,708.

What the recession indicator means

The indicator measures the likelihood of a US recession in the coming 12 months. Historically, a reading above 30 percent has accurately predicted every economic downturn for the last 60 years. The gauge ticked up to 32 percent in June, after hovering at 28 percent in May.

The indicator itself measures the spread between three-month Treasury note yields and ten-year yields. In simple terms, it flashes red when short-term yields are higher than those for long-term bonds (usually referred to as a yield curve inversion).

It doesn’t mean a recession is immediate. As Leslie Falconio of UBS Globalexplains, the inverted yield curve is only dangerous when it’s a long-term pattern:

“It has to stay there for a couple of months before you start to worry. One month or so, we wouldn’t consider it a lengthy period of time.”

Dow Jones in wait-and-see mode ahead of Powell speech

As the recession light flashes, all eyes are on Fed chairman Jerome Powell as he testifies before Congress today. Traders will be desperately looking for clues about the central bank’s future interest rate policy.

A strong jobs report last week poured cold water on traders’ hopes of multiple rate cuts. Powell will likely be pushed on his response to Trump’s increasing interference on Fed policy. The president has broadly criticized Powell and his reluctance to slash rates.

Asus Allows Gamers to Mine Crypto With Their...

80% of Colombians Open To Investing in Crypto:...

Crypto Exchange ShapeShift Is Looking for a New...

BitTorrent to Launch BLive Ahead of Schedule