Jens Weidmann, Bundesbank President and the Governing Council member of the European Central Bank, does not mind Libra. In fact, he believes that the regulators should give the project a chance, not suppress it.

Speaking at a G7 event, Weidmann pointed out that Libra has its advantages, specifically for the consumers. He urged other countries to allow such initiatives to burgeon and not to suppress them in their infancy. More so, since not all the details have been clarified.

The news has been embraced by the crypto community. Mattie Greenspan, the senior market analyst at eToro, has tweeted the statement. He pointed out that Weidmann favors Libra.

Hot off the German press…

The President of the German Central Bank is coming out in favor of #Libra. 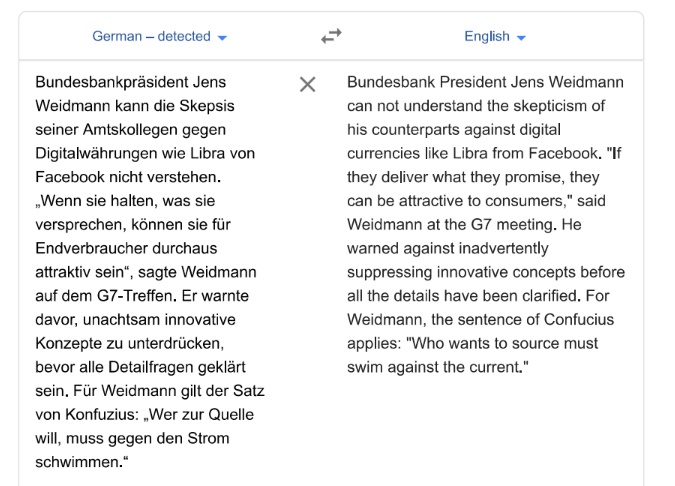 18 people are talking about this

Overall, Germany’s stance on the crypto issue is encouraging. Previously Burkhard Balz, Bundesbank’s representative, noted that crypto does not threaten the global financial stability. The latest comment from Weidmann also signifies a positive shift in his views on crypto. In spring, for example, he suggested that the digital asset realm might destabilize the financial system.

It remains unclear how other countries reacted to Weidmann’s statement in particular. However, it is well-known that their stance is far from friendly. Bruno Le Maire, the French finance minister, has partially confirmed this during a news conference on July 18. He noted that G7 “cannot accept private companies issuing their own currencies without democratic control.”

The utterance is everything but surprising as a number of countries and institutions are wary of crypto. France has already expressed its reservations over Libra. So did Donald Trump who fanned the flames, saying he’s not a big fan of BTC and altcoins. Moreover, it seems like many big shots from Wall Street are trying their best to come up with arguments against Libra. One of them is Mark Cuban, a billionaire entrepreneur. He described Libra as “a big mistake.” Concurrently, CNBC suggested it “could clean out” your wallet.

However, the project also receives a lot of support. For instance, a handful of blockchain projects have already started adding the coin.

A Suspect Crypto Site Stole My Identity – and I’m Furious

Multiple Crypto Addresses Sanctioned By The US Treasury

Startup Targets Cryptocurrency Crime – But Will The...