Radix is a new layer for the internet, where data, money, and assets are part of the very fabric of the technology. It is scalable, easy to use, and can be built and deployed via API – no smart contracts required! Recent testing demonstrated that the network is capable of 1.2 million TPS! 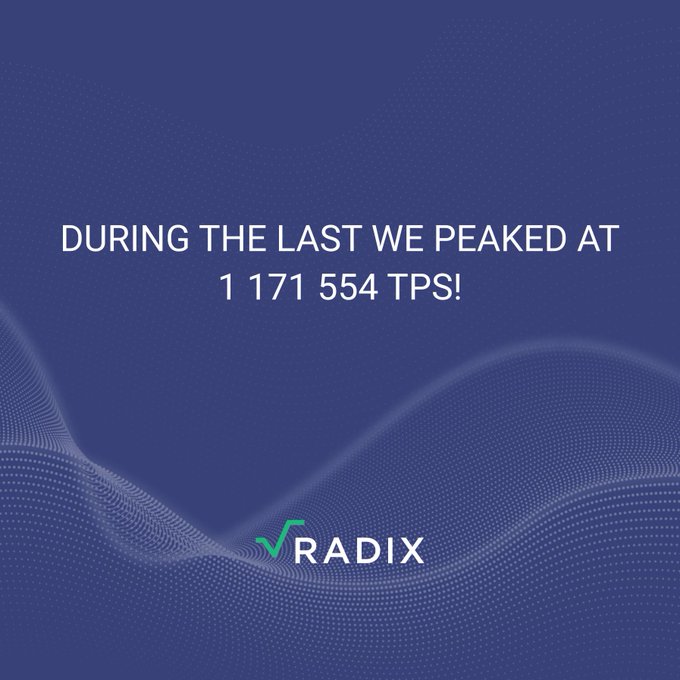 Radix is a public decentralised ledger, like Ethereum or Bitcoin, but built without Blockchain. Radix claims to solve the three key problems they believe the current technology faces; highly scalable, easy to build on and have predictable Fees. Radix can run on almost any device, is API driven, has its own token and claims to be scalable enough for the entire world to use it simultaneously!

1.2 million transactions per second during scalability test is more than any other Blockchain has managed, and is therefore very impressive. Details about the tests, the methodology and even some further clarifications, are available on their website. The live “AlphaNet” stats can be seen on their explorer, and a screenshot is included below.

When compared to BTC (7 TPS), ETH (15 TPS) and XRP (1000 TPS) you can start to see why people are increasingly excited about this project. In fact, the team behind Radix have said that the number of transactions per second that Radix is capable of achieving is unbounded, and that there is no limit. Being a new type of DLT means that Radix could face an uphill battle with gaining traction, just as Blockchain seems to be edging towards mainstream adoption. While the existing high performance Blockchains of today fight it out and struggle with the Blockchain Trilemma, it would appear that Radix have created a new type DLT with a number of unique benefits over past efforts.

Ripple CTO: “The Use Of Stablecoins [For Banks]...

Cataloguing And Catalyzing Blockchain For Impact

Will Russia Make Any Waves In Crypto This...

There’s a New Plan to Build the Hardware...

5 Industries That Will be Revolutionised by Blockchain